Brussels is the capital of Belgium and also known as the capital of the European Union, because the city hosts some major EU institutions. Historically it is a Dutch-speaking city, that has seen a language shift to French from the late 19th century onwards. Today the majority language is French and the Brussels-Capital Region is an officially bilingual enclave within the Flemish Region. Belgium is famous for inventing French fries, so you will find many stores that sell fries, but the city is also famous for its chocolate, beer, waffles and the typical dish “Moules-frites” (mussels and fries). The city center is not that big, so that you can easily discover most of the important sights on foot. If you just have have one day, I would recommend that you visit the sights that you will find on the map below. 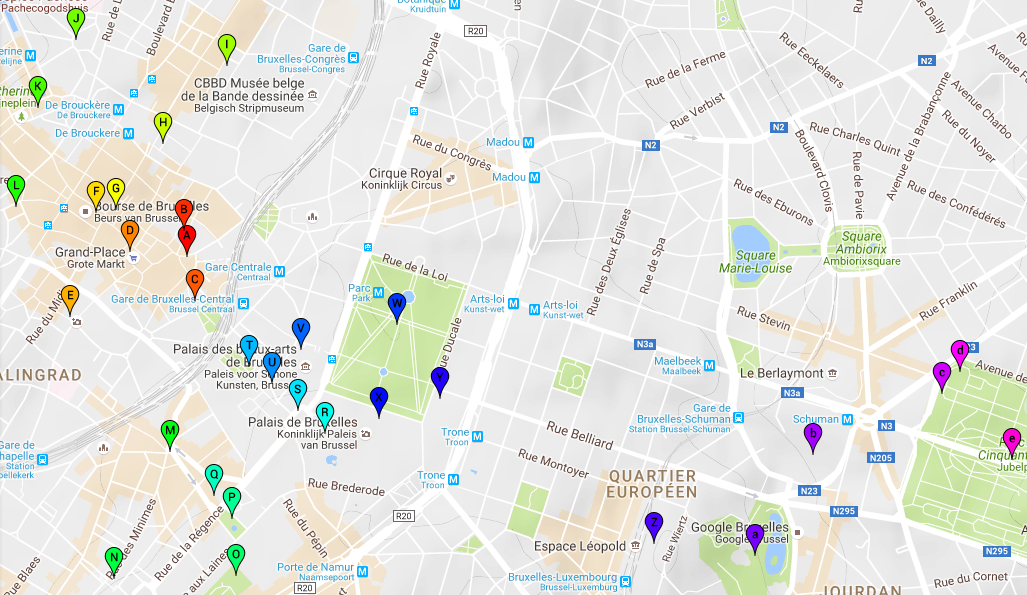 Start your journey at the Rue du Marché aux Herbes (A), where you will find restaurants, stores and hotels. St. Hubert Royal Galleries (B), the first covered shopping arcade in Europe that dates from 1846, is next on your list. Walk to the Church of St. Mary Magdalene (C), one of the oldest churches in Brussels, before reaching the Grand-Place (D), the central square of Brussels. Bombarded in 1695 by Louis XIV and completely destroyed (except for the Town Hall), it was rebuilt in less than 5 years. Today it is surrounded by opulent guildhalls and two large edifices, the city’s Town Hall and the Breadhouse building containing the Museum of City of Brussels.

Admire one of the most famous sights in the city, Manneken-Pis (E). Brussel’s oldest inhabitant is symbolizing the town’s imprudently mocking and boisterous spirit and was sculpted by Jerome Duquesnoy in 1619. Another impressive landmark is the Stock Exchange (F), which was founded by decree of Napoleon in 1801 and is located on Boulevard Anspach. It’s the namesake of the Place de la Bourse, which is, after the Grand Place, the second most important square in Brussels. Next to the Stock Exchange you will find the Church of Saint Nicholas (G). This small church is almost 1,000 years old, but little remains of the original structure. Its 11th-century Romanesque lines are hidden by a 14th-century Gothic facade and the repairs made after the French bombardment of 1695. Walk along the Royal Théâtre de la Monnaie (H) before reaching the marvelous Place des Martyrs (I), a unique Neo-Classical architectural ensemble built in 1775. Today it serves as a cemetery for the victims of the 1830 insurrection and was remarkably renovated. Before visiting Place Saint Géry (L), a 19th century red brick meat hall with a beautiful glass roof, which was turned into a shopping centre, you can admire the Beguinage Church of St. John the Baptist (J) and the Church of Sainte Catherine (K). Walk to the Place du Grand Sablon (M), a beautiful architectural square with houses from the 16th to the 19th century. There you spend your money in several antiques shops, typical restaurants and chocolatiers. Next on your list is the impressive Palais de Justice (N), the most important court building in Belgium and the biggest courthouse in the world.

Walk to the Egmont Palace (O), a large mansion which houses the Belgian Ministry of Foreign Affairs before admiring the Place du Petit Sablon (P), a charming little garden, which is ringed by 48 bronze statuettes representing the medieval guilds. To enjoy amazing views over the city centre, you have to walk to the Mont des Arts (T). On your way you will cross the Church of Notre Dame du Sablon (Q), the Church of Saint Jacques-sur-Coudenberg (R) and the Royal Square (S). Next to the Mont des Arts you will find the former de Cleves-Ravenstein Mansion also commonly known as Hotel Ravenstein (U), which is the last standing example of the aristocratic mansions built between the end of the XV century and the beginning of the XVI century. From there you can walk to an Art Deco masterpiece by Victor Horta, the Bozar – Centre for Fine Arts (V), one of the jewels of Belgium’s cultural and architectural heritage. Take a small break and relax in Brussels Park (W), the largest urban public park in the center of Brussels with an area of 13.1 ha. Another beautiful building is waiting for you next to the Park, the Royal Palace (X). It was built in the 18th century, but was rebuilt under Leopold II, to become the official Royal Residence, site of ceremonies and receptions. The flag shows if the King is in residence or not. Right next to the Royal Palace, you will find the neoclassicla Academy Palace (Y). Today it houses five Belgian academies including The Royal Academies for Science and the Arts of Belgium. A bit outside of the city center you can visit the famous European Parliament (Z), the directly elected parliamentary institution of the European Union. Together with the Council of the European Union and the European Commission, it exercises the legislative function of the EU. Walk through the nice Leopold Park (a), before reaching the European Commission (b), the executive body of the European Union responsible for proposing legislation, implementing decisions, upholding the EU treaties and managing the day-to-day business of the EU. The last sights on your list should be the Horta Pavillon (c), a neoclassical pavilion in the form of a Greek Temple that was built by Victor Horta in 1896, the Grand Mosque of Brussels (d), the oldest Mosque in Brussels, and the amazing Cinquantenaire Arch (e), which was built in remembrance of the 50th anniversary of the Belgian independence.