Syracuse, the capital of the province of Syracuse, is one of the most beautiful cities in Sicily. With its magnificent old town Ortygia and its location right next to the sea, it attracts a lot of visitors throughout the year.

In ancient times, Syracuse was the largest and most powerful city of Sicily and its cultural center for several centuries. Marcus Tullius Cicero described it as “the largest and most beautiful of all Greek cities”. The old town on the island of Ortygia threatened to decay after the Second World War, so that many residents moved to the modern residential areas on the mainland. Through extensive renovation and restoration work from 1990 onwards, the old town was revitalized and got attractive again. Ortygia is also home to a large number of historical buildings and monuments. That’s why Syracuse became a UNESCO World Heritage Sight in 2005. The city can be visited during a day trip, but the most convenient way would be to stay two days, because especially in the evening the Old Town of Syracuse comes to live.Here are the top things I enjoyed the most in Syracuse:

The Greek Theatre of Syracuse was built in the fifth century BC by Hiero I. With a capacity of 15,000 spectators and a diameter of almost 140 meters, it is still one of the largest Greek theatres in the world. It is home to a festival of Greek plays which takes place in May and June each year. 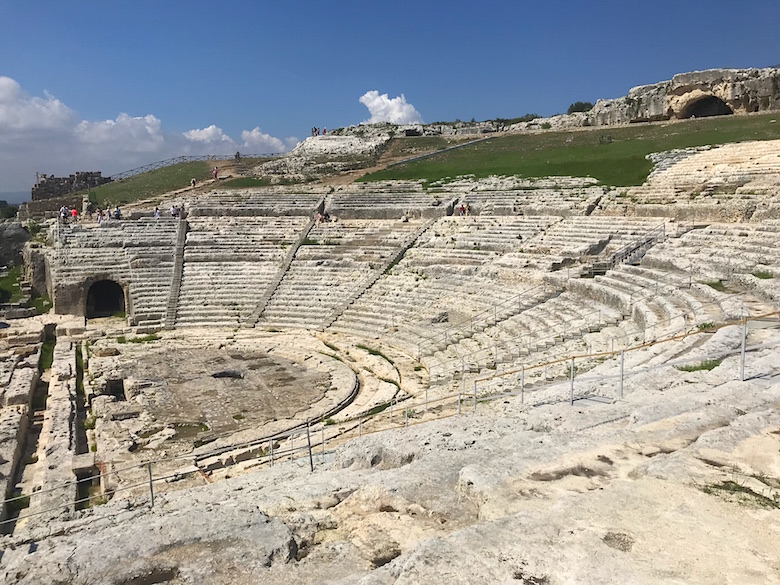 Next to the Greek Theatre you will find a large cave, which is called the Ear of Dionysius. 16th-century painter Caravaggio named the cave after a vicious fifth-century BCE ruler of Syracuse. He is said to have used the cave as a political prison, and the cave’s incredible acoustics gave him the ability to eavesdrop on his enemies. 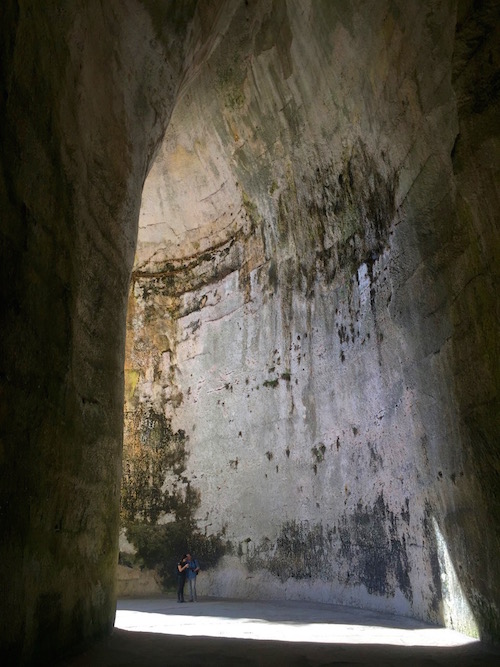 The Roman Amphitheatre in Syracuse, which has a size of 140m by 119m, was used for gladiator fights. In the centre of the area is a rectangular space, which was used for the scenic machinery. 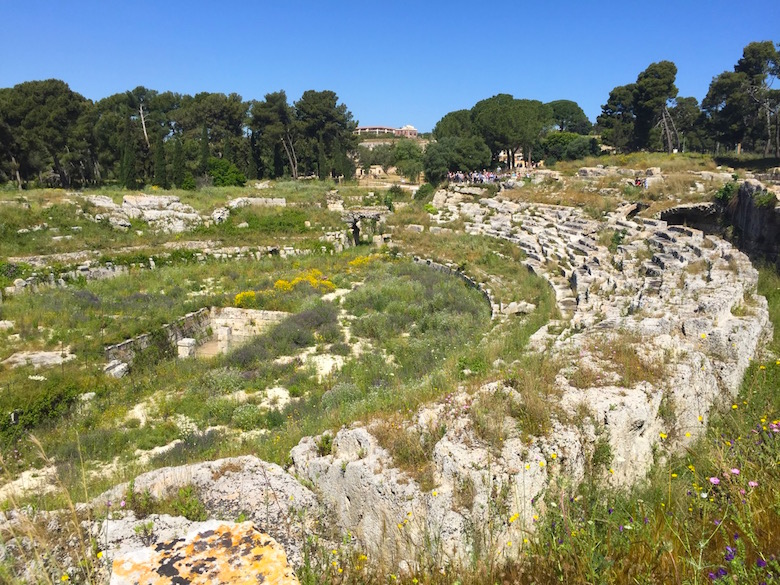 On the Island of Ortygia you will find the Temple of Apollo, a Greek temple dating from the 6th century BC. It is the oldest known Doric temple in Western Europe. It was turned into a Byzantine church, before the Muslims took over and converted it into a mosque. It was turned back into a church under the Norman rule. 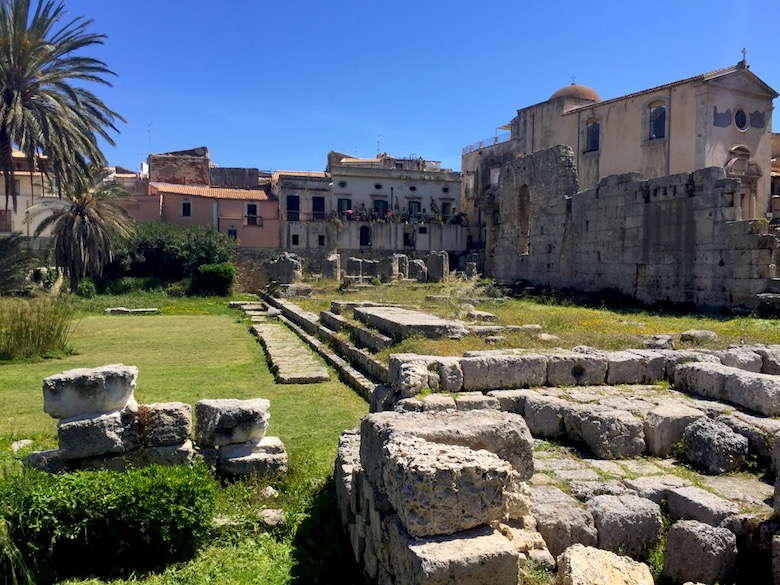 The ancient market of Syracuse is open daily and awaits you with a lot of Italian specialities. You can find fresh fish, vegetables, fruits and spices. 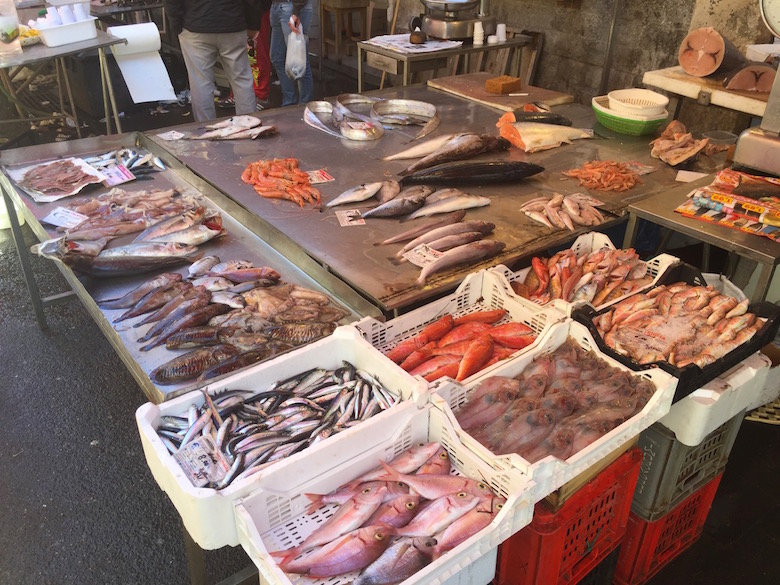 Piazza Duomo is one of the most beautiful Baroque piazzas in Sicily and is surrounded by ancient noble palaces, bars and restaurants. On the Piazza you will also find the amazing Cathedral of Syracuse. The building incorporates large parts of an ancient temple dedicated to Athena. In the 7th century the conversion to a Byzantine cathedral was carried on under the bishop Zosimo. After the alterations and extensions during the following centuries, the cathedral offered a unique architectural blend. In addition to the still recognizable parts of the ancient temple, elements of Byzantine architecture, Norman Romanesque and Sicilian baroque are united in it. 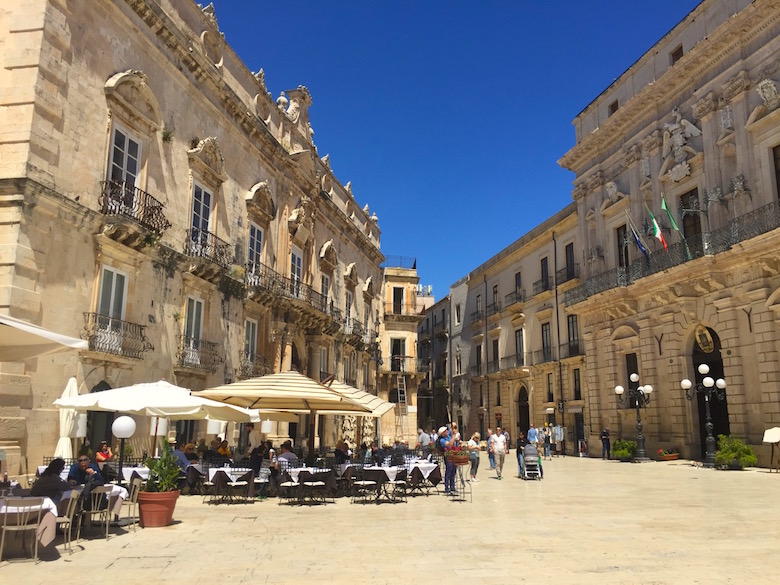 Next to the sea, you will find this ancient spring, which was the city’s main water supply in ancient times. Legend has it that the spring was created by the transformation of the goddess Artemis into the handmaiden Aretusa. According to legend, the nymph Arethusa fled from the Greek river god Alpheus, jumped into the sea in the Peloponnese and reappeared in Ortygia. With the help of the goddess Artemis, she was transformed into a source. 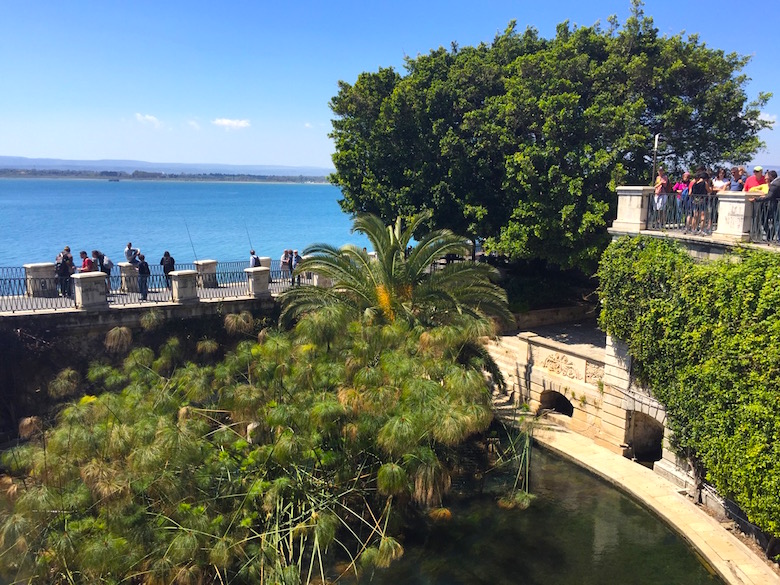 Piazza Archimede, which is dedicated to the famous Greek mathematician Archimedes, is surrounded by numerous beautiful palaces from the 14th and 15th century as well as some cafes. The highlight of the square is the beautiful Art Nouveau fountain, Fontana di Artemide, which shows the nymph Arethusa being transformed into a spring with the help of the goddess Artemis. 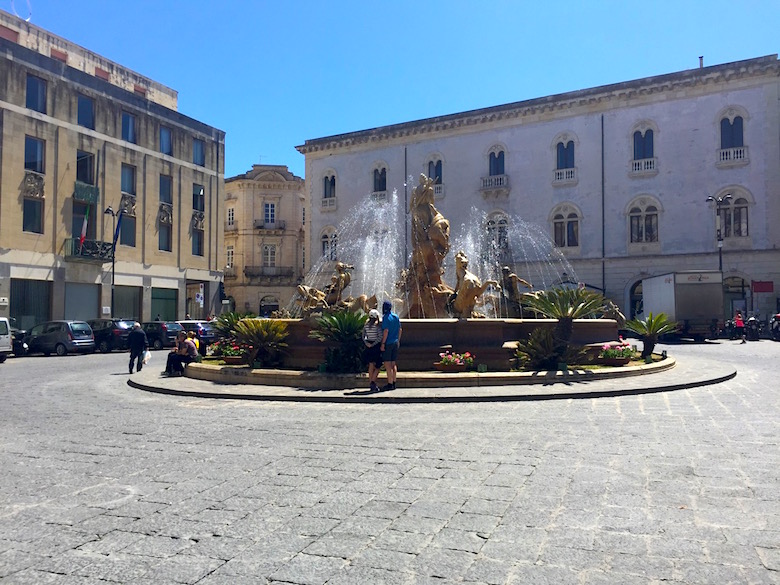 Ortygia offers a thriving and vibrant cultural life with countless initiatives and exhibitions, as well as numerous bars and restaurants, which can be discovered by waking along the narrow streets. Especially in the evening, when the heat is gone, life is taking place in the streets, which creates a really nice atmosphere.

Santa Lucia alla Badia is a baroque church, which is dedicated to the patroness of the town Lucia of Syracuse. The special attraction of the church is the altarpiece of St. Lucia by Michelangelo Merisi da Caravaggio from 1608. 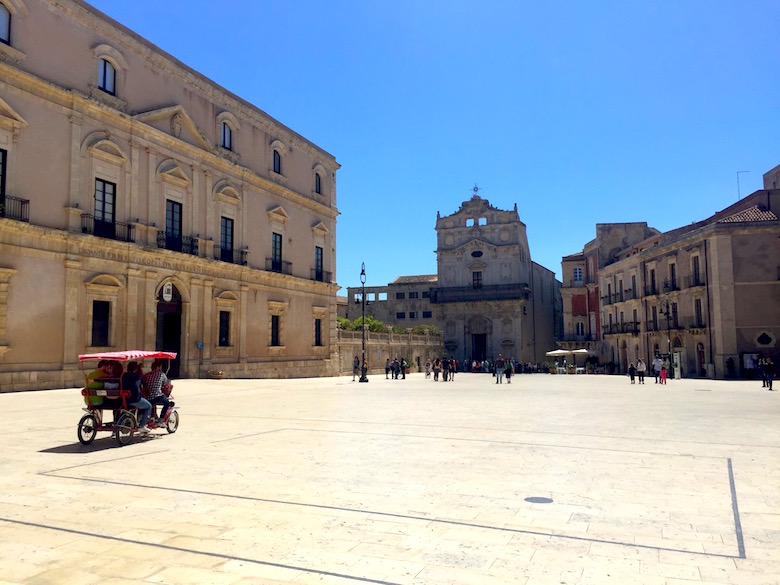 Walking by the sea

As Ortygia is an island, which can be reached by three bridges from the mainland, you can walk along the island by the sea. There are a few spots from where you can take a swim. The best one is close to the Fontana Aretusa. 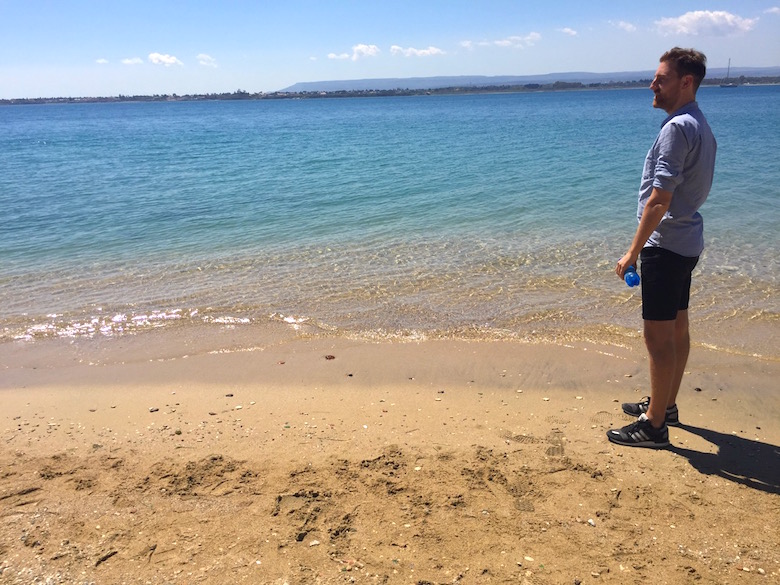 Castello Maniace is a fortress, which is located on the southern tip of Ortygia. The fortress was built between 1232 and 1240 during the time of Frederick II and was open for public in 2004. 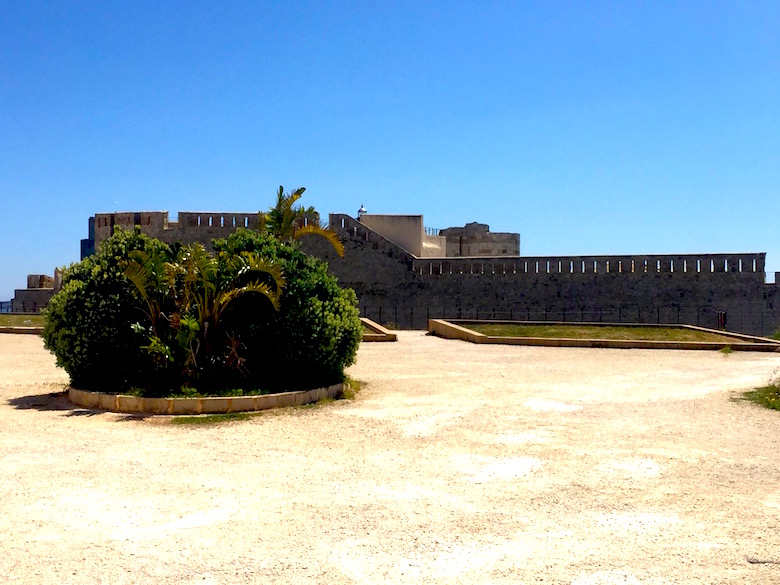 In the middle  of the weekly market, you will find this little gem of the Slow Food movement, which awaits you with Sicilian treats of all kinds. You can taste delicious antipasti inside or outside or you can buy Sicilian cheese, wine, salami and much more as a gift or souvenir. 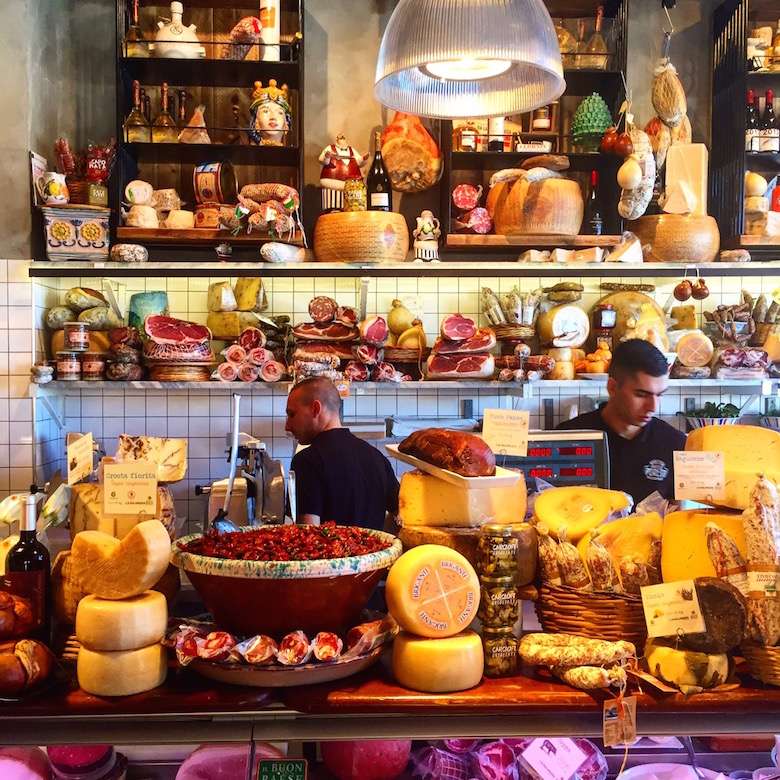