Hampi is located in the Indian state of Karnataka and is a UNESCO World Heritage Site. The princes Hukka and Bukka founded the “largest open air museum” Hampi in the 14th century. Once the glittering capital of the Vijayanagara Empire (1336-1565), it still displays the special architecture and art of the former dynasty. Every year, it attracts thousands of tourists and pilgrims. Wide expanses of hills dotted with boulders make the landscape of Hampi unique. Scattered over those hills and valleys are more than 500 monuments. Among them are beautiful temples, foundations of palaces, remains of aqueducts, former market streets, royal pavilions and bastions. The best way to explore these monuments is by bike or by tuk tuk. I opted for the second option and had two full days to discover the most impressive sights in the city. Here are the 15 places that you have to visit in Hampi:

This colossal bath was constructed for the women of the royal family. Protected by umbrellas, which were fastened in brackets on the bottom of the basin, the women were taking a bath. Eight balconies lead to the pool. There are still traces of Islamic influenced stucco work to be admired. 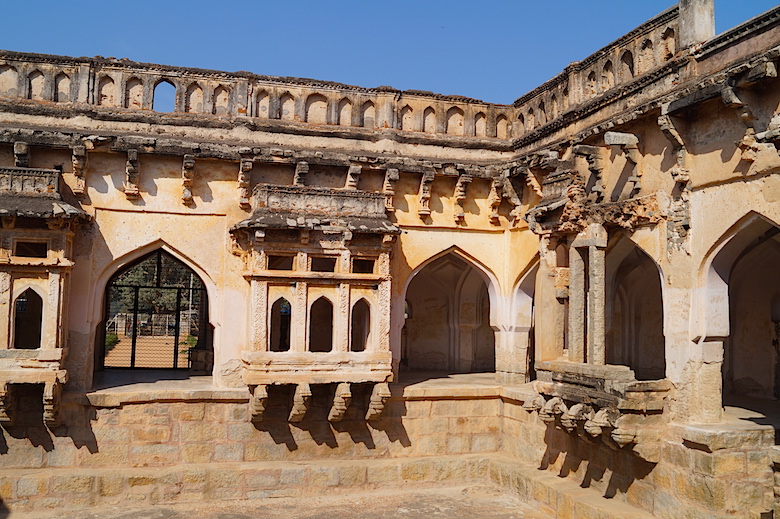 The Royal Enclosure, the heart of the capital city of Vijayanagara, is the largest enclosure in the ancient city. The enclosure has three entrances, two in the north and one in the west. It is protected by lofty double walls and housed about 43 buildings. The most interesting buildings in the enclosure are the Mahanavami Dibba, the Water Tank and the Secret Council Chamber. 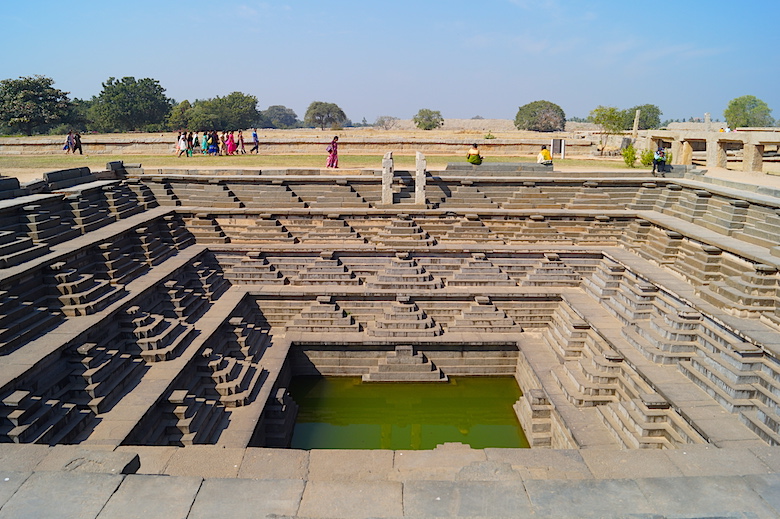 The Hazararama Temple is the only temple situated in the core zone of the Royal Enclosure. Dedicated to Vishnu, this 15th century temple is popular for its sculpted friezes, narrative sculptures and sculpted polished pillars in the main hall. 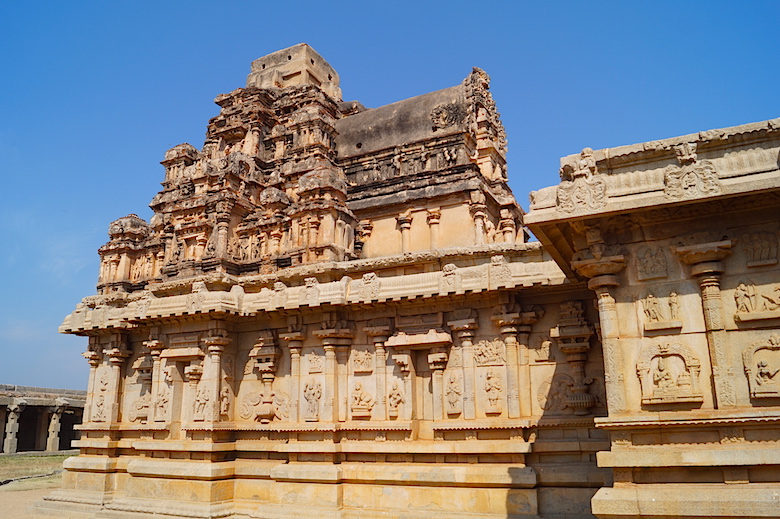 The Zenana Enclosure was a secluded area reserved for the royal women. A few of the most impressive sights are located in the Zenana Enclosure. This includes the Lotus Mahal, a gracefully designed pavilion, which probably served the queen as a summer palace, and the Elephant Stables with their domed chambers and arched entrances. 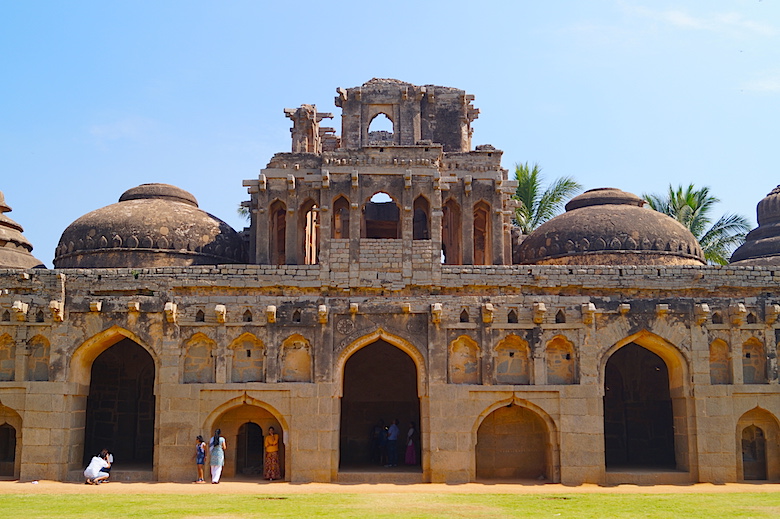 In the Mohamaddens Quarters you can find two cubical structures and a few tombs. The whole area served as a cemetery for the Muslim elites of the Vijayanagara capital. 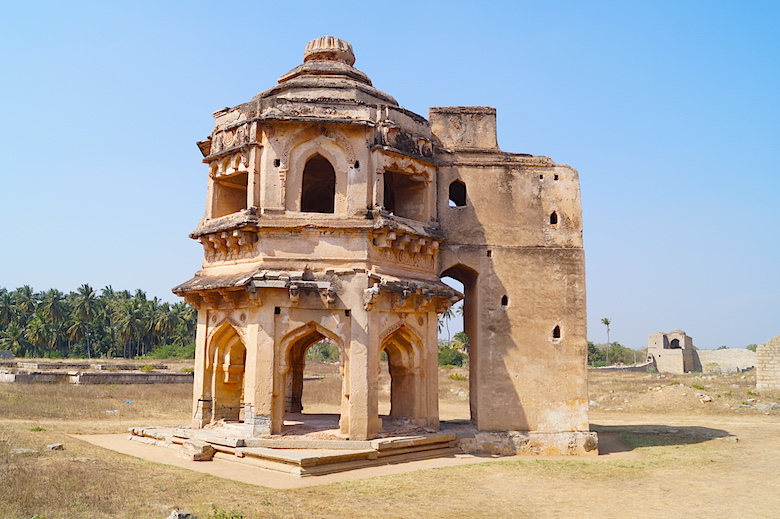 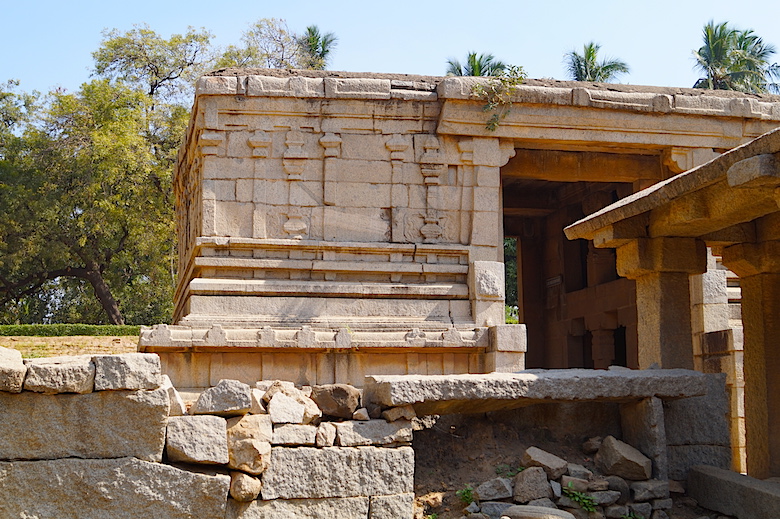 This magnificent monolithic Laksmi Narasimha sculpture, the fourth incarnation of Lord Vishnu, has a height of almost seven meters. It is one of the finest examples of Vijayanagara sculptures. 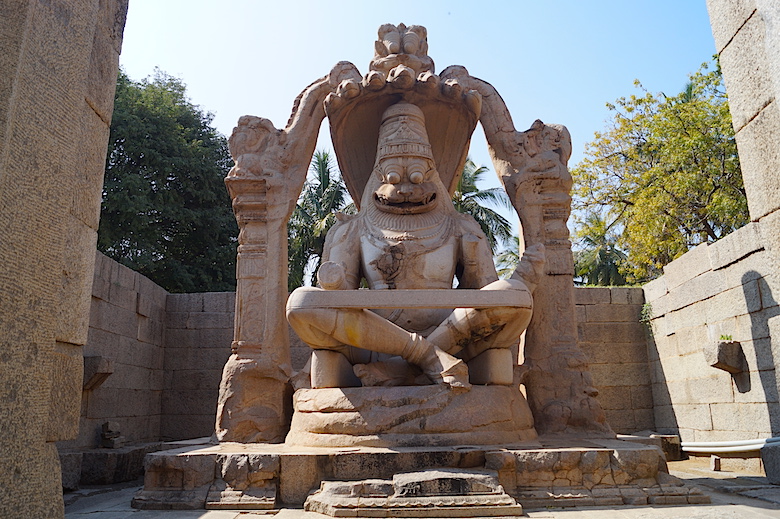 The Krishna Temple dates back to the 16th century and was built by King Krishnadevaraya to commemorate the conquest of the Udayagiri Kingdom in Orissa. 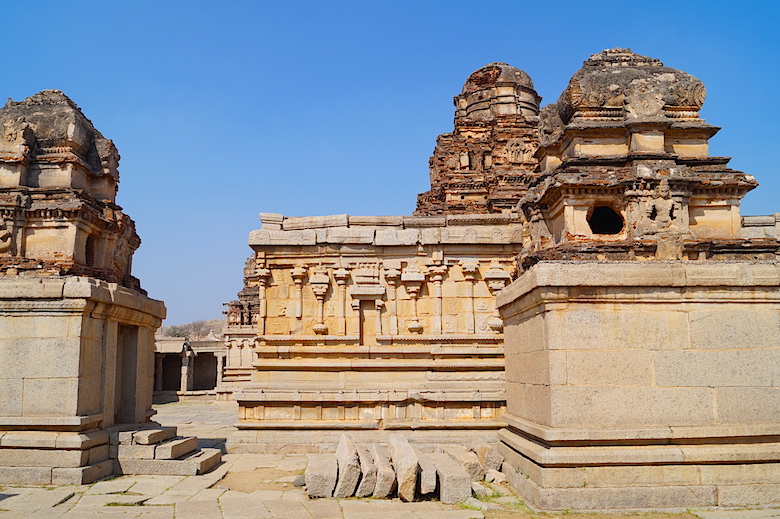 Just opposite the Krishna Temple you can find the Krishna Bazaar. It was once a marketplace. The most beautiful part of the bazaar is the sacred tank with its small pavilion in the center. 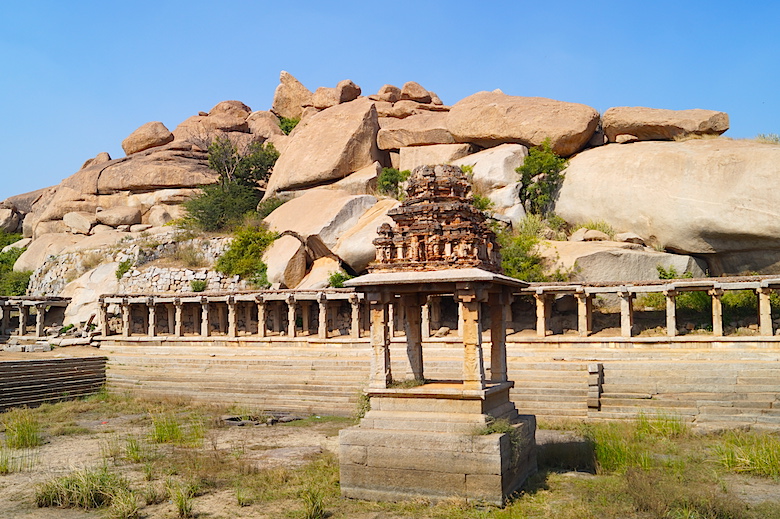 The Kadalekalu Ganesha Temple is situated on the Hemakuta Hill. The temple houses one of the largest statues of Lord Ganesha in South India. The statue is almost five meters tall and was carved out of a single boulder. From the temple you can enjoy nice views of the famous Virupaksha Temple. 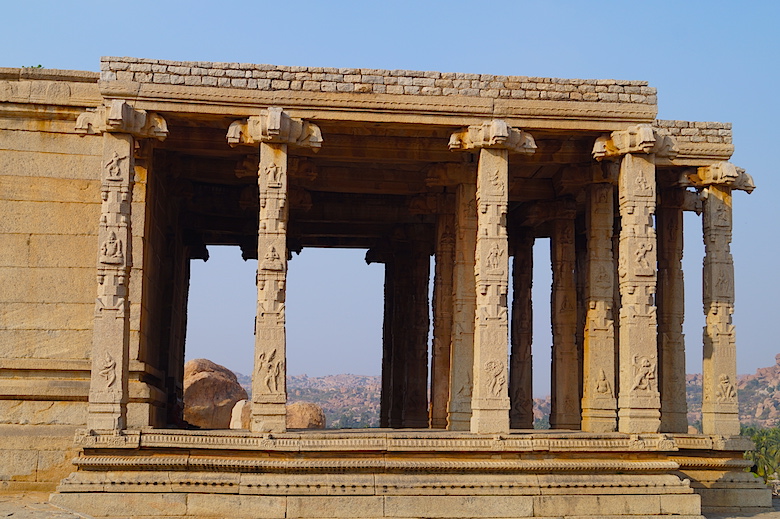 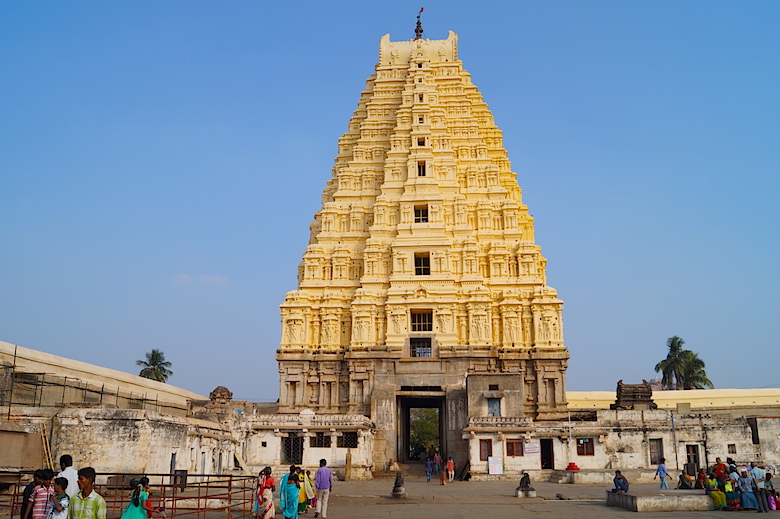 This well-preserved 16th-century temple is considered as a masterpiece of the Vijayanagara art. The most photographed tourist attraction in South India is the stone chariot in the courtyard, whose wheels were able to rotate in the past. 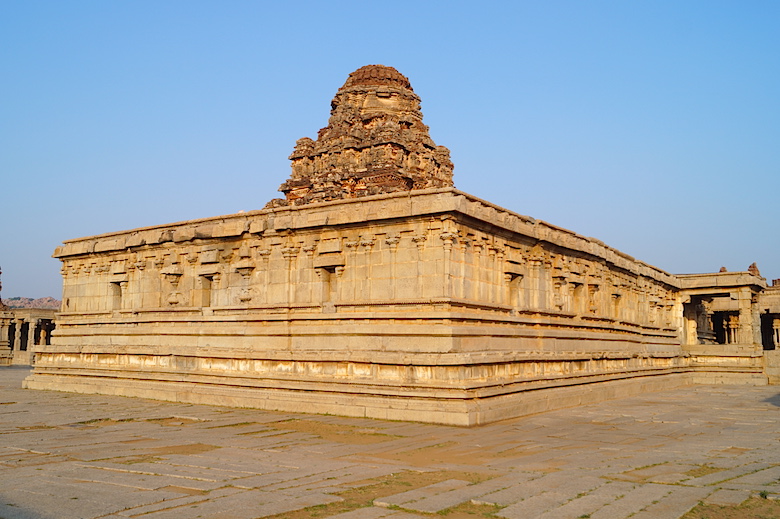 Just before sunset you should visit the Malyavanta Raghunatha Temple. Just outside its walls you can find nice spots on the rocks to admire the sunset. It’s also a perfect location for nice views over the whole area. 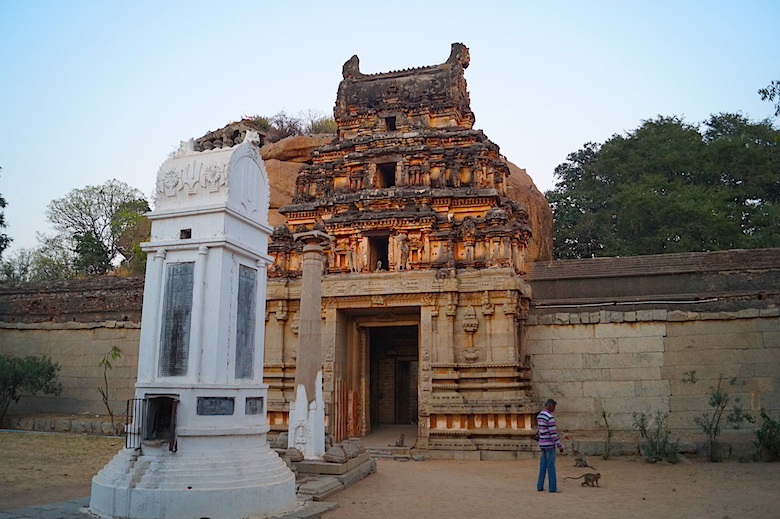 A whitewashed temple stands on top of beautiful Anjaneya Hill. A white trail of steps is going up to the temple. It takes around 30 minutes to reach the top. From there you have amazing views on the rocky mountains and paddy fields that surround Anjaneya Hill. 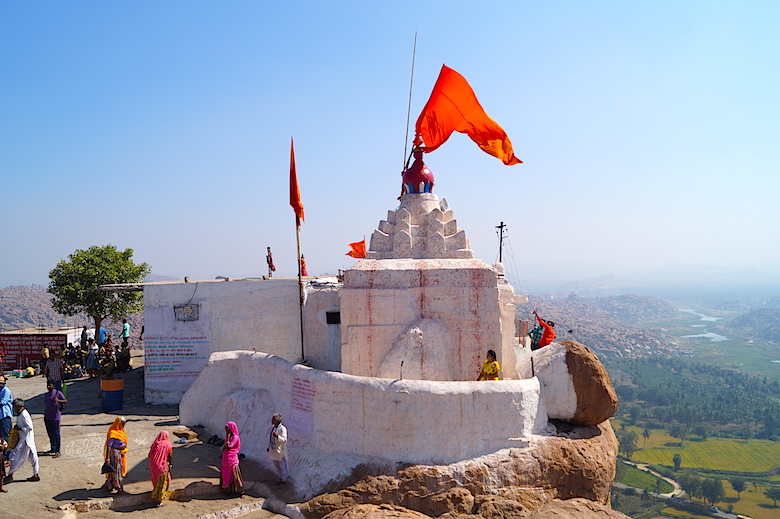 The Durga Temple is located on a small hillock. The main attractions of the temple are a tree decorated with colorful bundles and the remains of a fort. 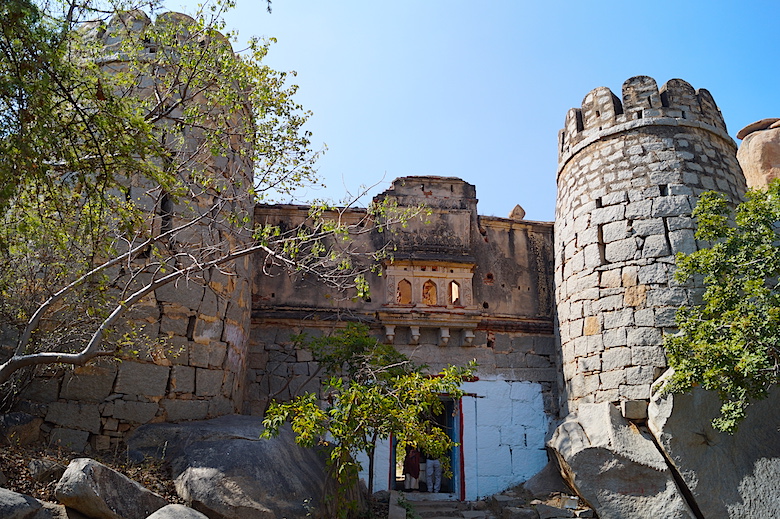