Amsterdam is one of the most beautiful cities in Europe. The Dutch capital is not only famous for its sights like the Anne Frank House or the Rijksmuseum, but also for its vibrant nightlife, delicious restaurants, fancy stores and easy-going locals. Even if Amsterdam has more than 800,000 inhabitants, many locals call the city a village due to its picturesque idyll. You can easily spend a few days in the city, especially in summer when the canals are full of boats and locals are sitting outside in the numerous cafés. I spent three days in the city and had enough time to stroll around the most important districts and visit the most famous sights and museums. It is recommended to visit the city on foot or even better by bike, as it’s the best way to live the real Amsterdam feeling. The city has amazing bike paths and in every corner you can borrow a bike for a day. Here are the 13 top things that you have to see in Amsterdam.

Rijksmuseum is the most famous art museum in the Netherlands. The imposing building is located in the museum quarter in the Oud-Zuid district. It houses paintings of famous painters such as Jan Vermeer, Frans Hals, Jan Steen and works by Rembrandt van Rijn. The most famous painting in the museum is definitely “The Night Watch” by Rembrandt van Rijn. There are just a few pictures of the Dutch Golden Age, which are so well known. Even the size of “The Night Watch” with more than three and a half meters height and more than four meters width is impressive. 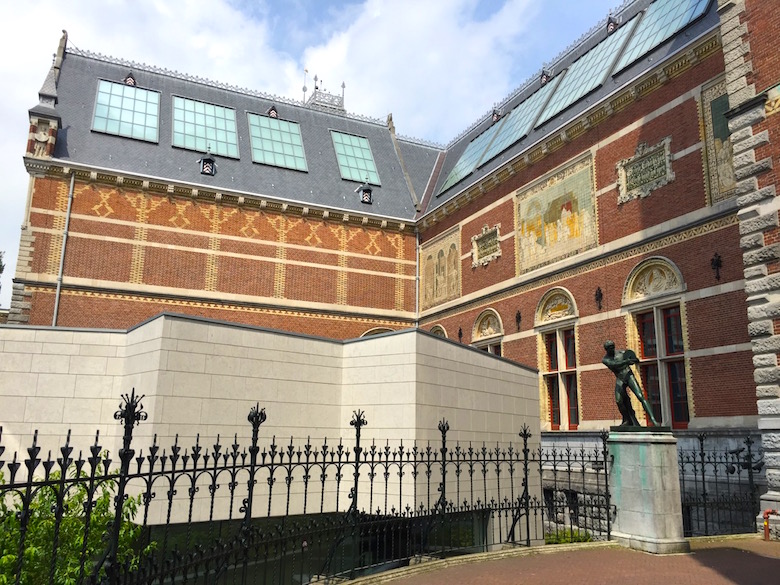 The 800-year-old Oude Kerk (Old Church) is the oldest preserved building in the Dutch capital and is located in the red light district. As the church was built on a cemetery, the floor consists entirely of gravestones. There are more than 2500 graves in the church, under which are buried 10,000 Amsterdam citizens. In addition to church services the Oude Kerk hosts exhibitions and concerts. 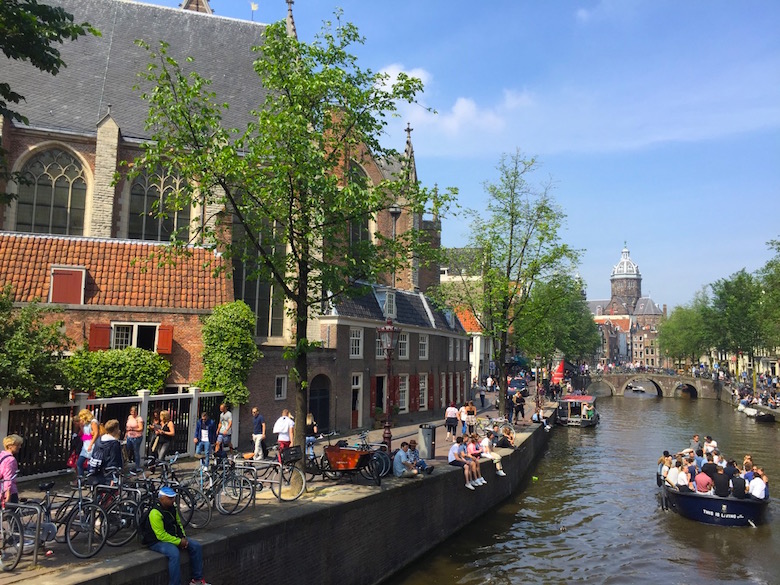 Vincent Van Gogh died at the end of the 19th century and left more than 2000 paintings and drawings. Over a quarter of these works are exhibited at the Van Gogh Museum. Among the main exhibits are the “The Potato Eaters”, “Bedroom in Arles” and “The Sunflowers”. In addition the museum shows some of Van Gogh’s letters and his suicide weapon. You will also find collections of other artists, such as Gauguin, Monet, Toulouse-Lautrec and Manet. 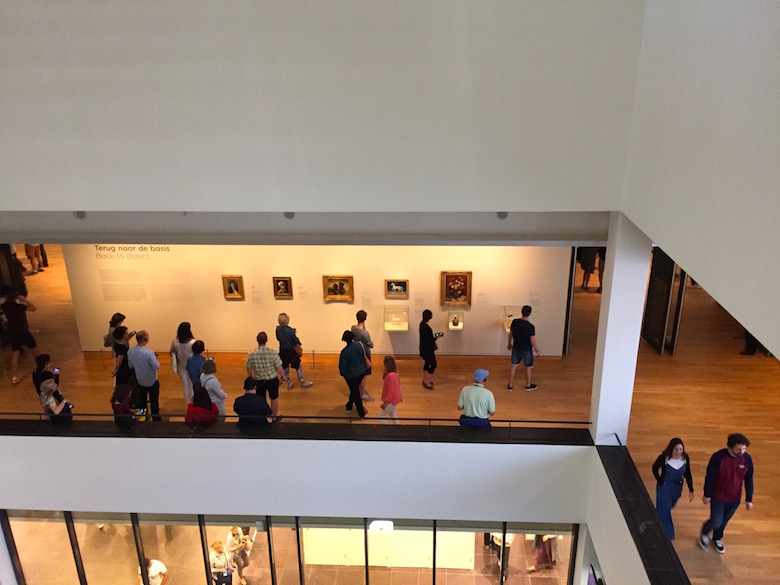 The most famous backyard in Amsterdam is the Begijnhof, which is close to the busy Kalverstraat. The picturesque backyard is surrounded by 47 historic buildings, some of which date back to the 17th century. At the end of the Middle Ages, the houses around the yard were inhabited by single women living in religious communities. Between two houses somewhat hidden, you can still admire a chapel. 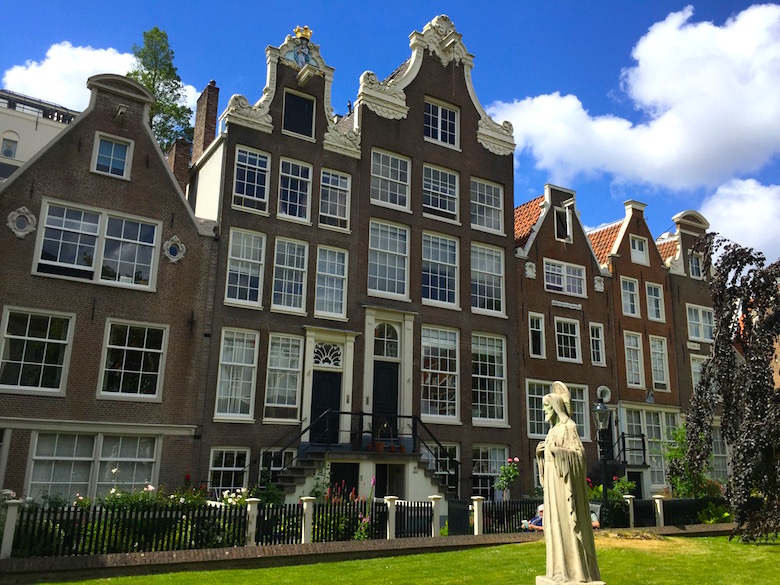 Vondelpark is the most famous and second largest park in Amsterdam. The park covers some 47 hectares and is located in the Oud-Zuid district. The park is named after the dramatist Joost van den Vondel, whose monument stands in the park. It is frequented by more than 10 million visitors each year, who enjoy the open-air stage, the playground, the numerous cafés and restaurants as well as the Tea House. 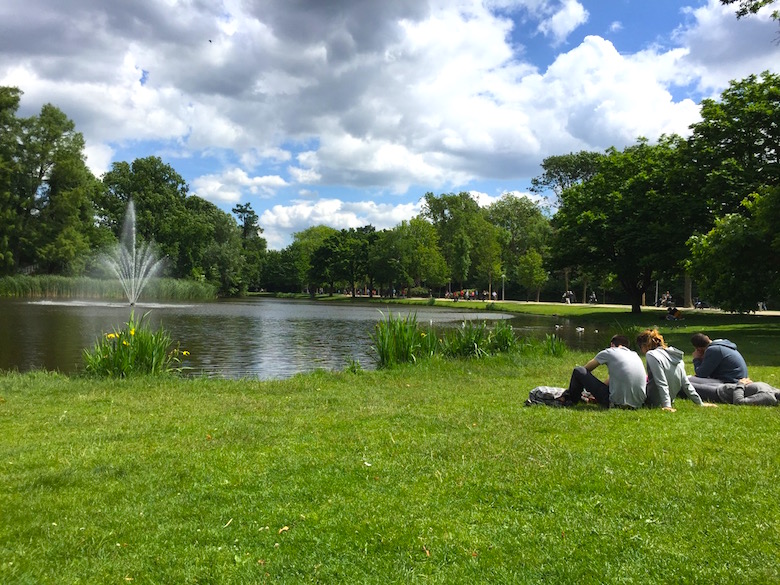 Amsterdam wouldn’t be as famous without its beautiful canals, as they characterize the historical sights of the city. The most famous canals are Prinsengracht, Keizersgracht, Herengracht and Singel. Together, these four canals have a length of around ten kilometers, an average depth of 2.40 meters and a width of 27 meters. As the total length of the passable canals is more than 80 kilometers it is worth to rent a boat or go on a boat trip. 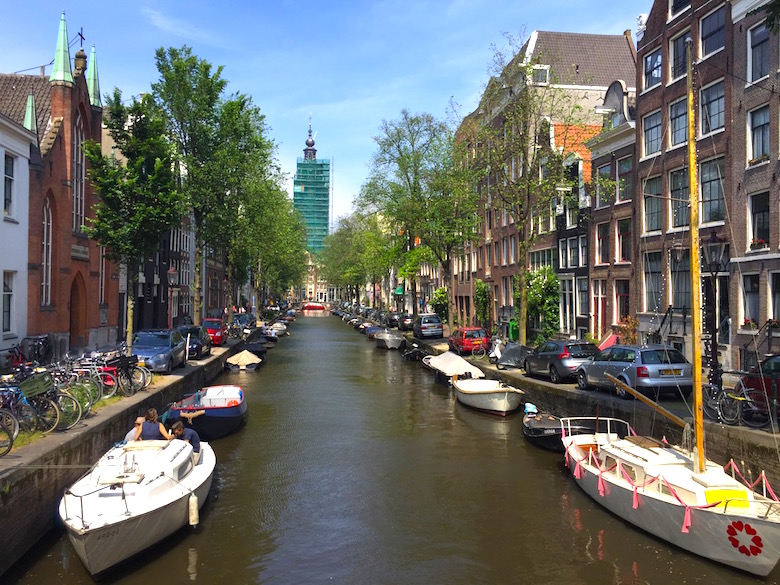 The Waterlooplein Flee Market is one of the most famous flee markets in Amsterdam and a highlight for all the bargain hunters. Here you can find everything from old clothes to antique items. The Waterlooplein Market was once a Jewish market, which has turned into a flee market over the years. 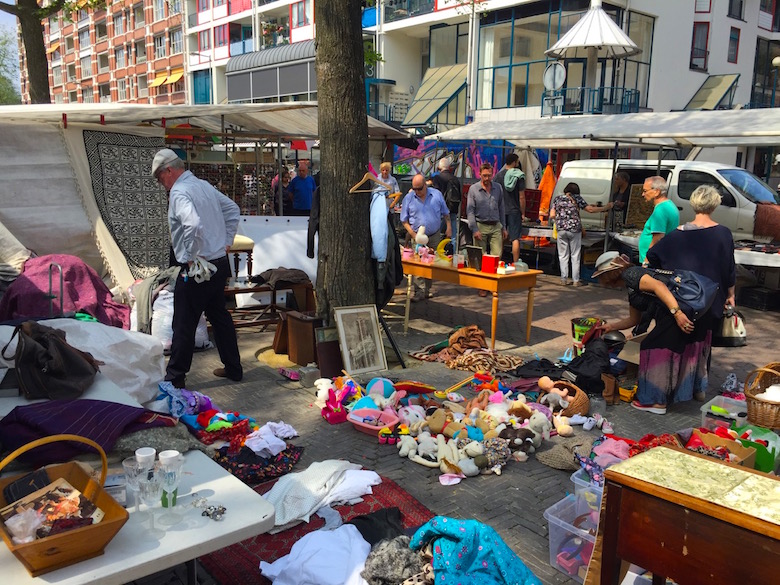 No visit in Amsterdam is complete without a visit to the famous Anne Frank House. The house is located on the Prinsengracht and can’t be overlooked as there are always hundreds of people standing in a line to enter the house. The most convenient way to visit the house is to book a ticket online. The ones that have the chance to enter the museum will be drawn directly into the cramped and inconceivable world of Anne Frank, who was hiding in this house from the National Socialists for two years. 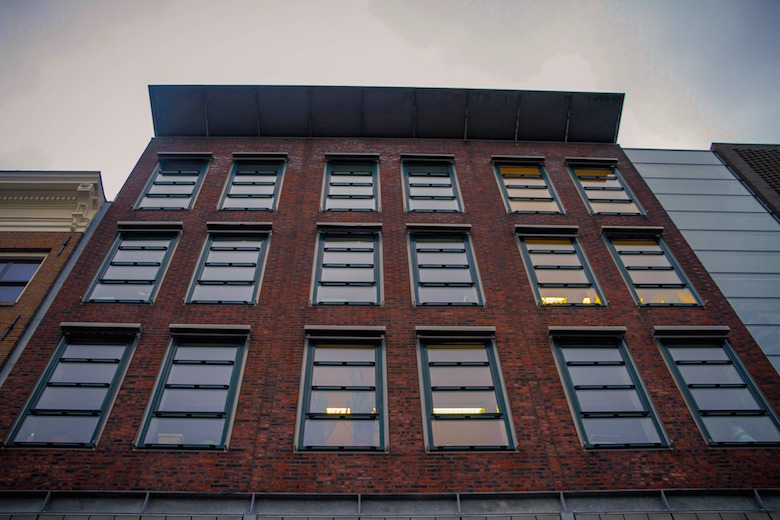 The Dam is the main square in Amsterdam and the most famous city square in the Netherlands. It is located in the medieval city center and is surrounded by numerous buildings of national importance. The most impressive building is the Royal Palace, which is is only used by the Royal family for representation purposes. The other imposing monument is the Nieuwe Kerk (New Church), which serves as a cultural center, exhibition and concert hall. 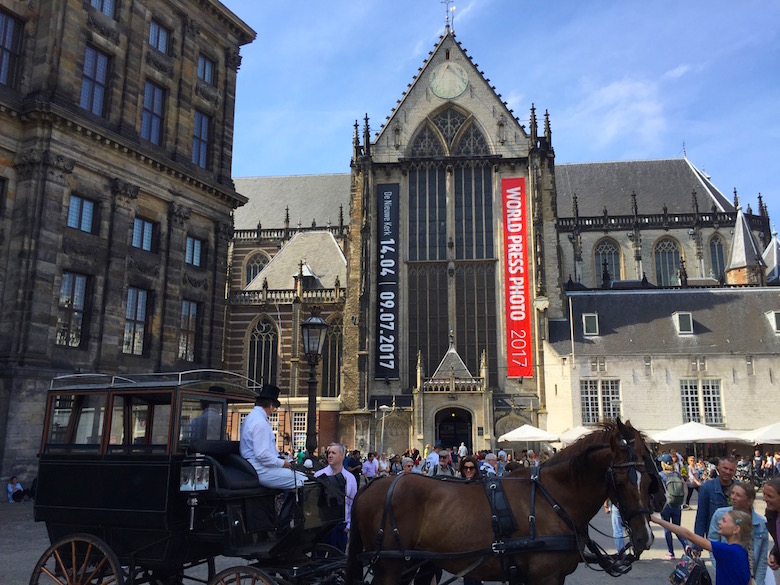 With its small houses the Jordaan district has always been one of the typical working-class districts. Towards the end of the 20th century it became hip to live in the district, so that the rents increased strongly and more and more residents couldn’t afford to live there anymore. Today it is one of the most beautiful areas in Amsterdam. You will discover unique small fashion stores, great galleries and restaurants or cafés that have their own individual charm and invite you to linger. 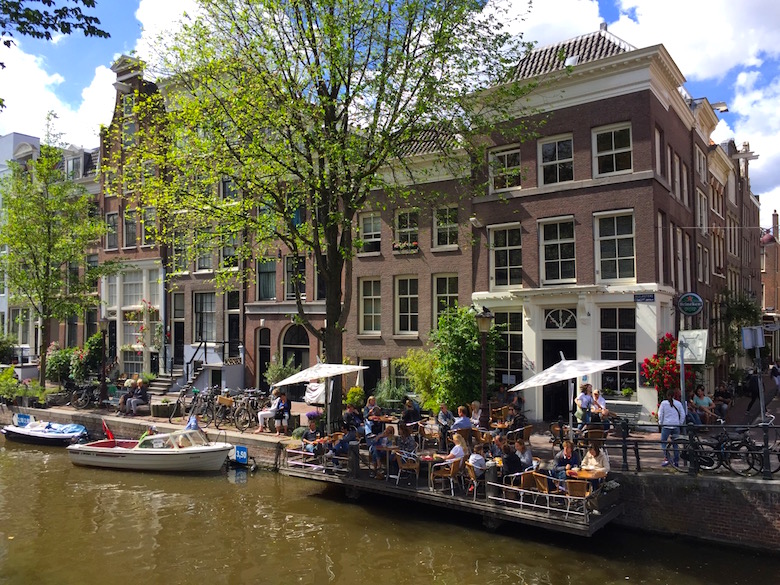 Next to the red light district you will find the famous Nieuwmarkt, a market square with many terraces, music cafés and Asian fast-food restaurants. Originally it served as a cattle market and place of execution. Today there are occasional antique and book markets, as well as a bio food market on Saturday. 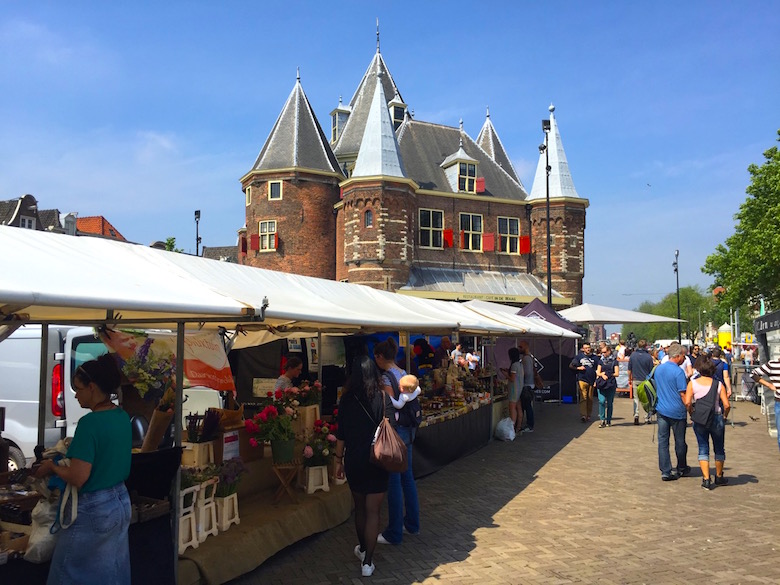 Amsterdam offers excellent shopping opportunities for both the big and the small wallet. Numerous shopping streets and several shopping centers are awaiting you with inexpensive bulk goods as well as trendy designer shops. Also the weekly markets tempt you to stroll and dream. 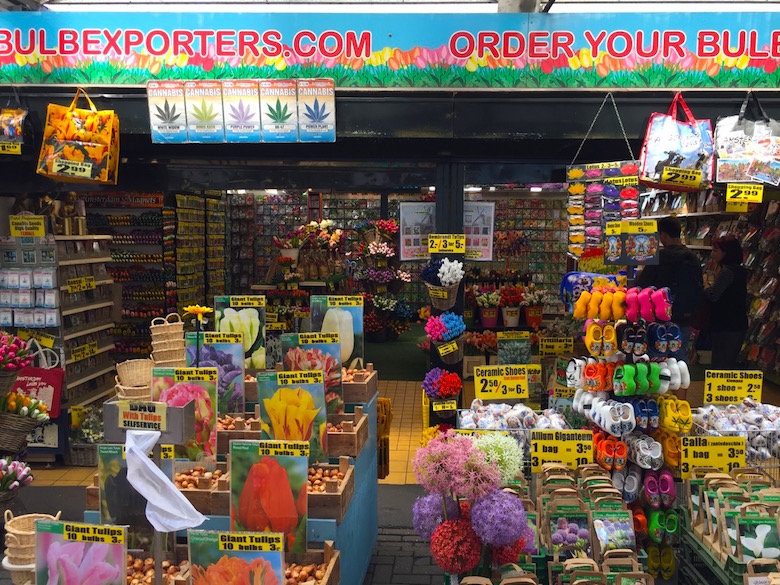 Rembrandtplein is a large square in the center of Amsterdam, which was named after the painter Rembrandt van Rijn in 1876. In the blocks around the square are bars, restaurants and clubs, which attract a lot of tourists and locals. 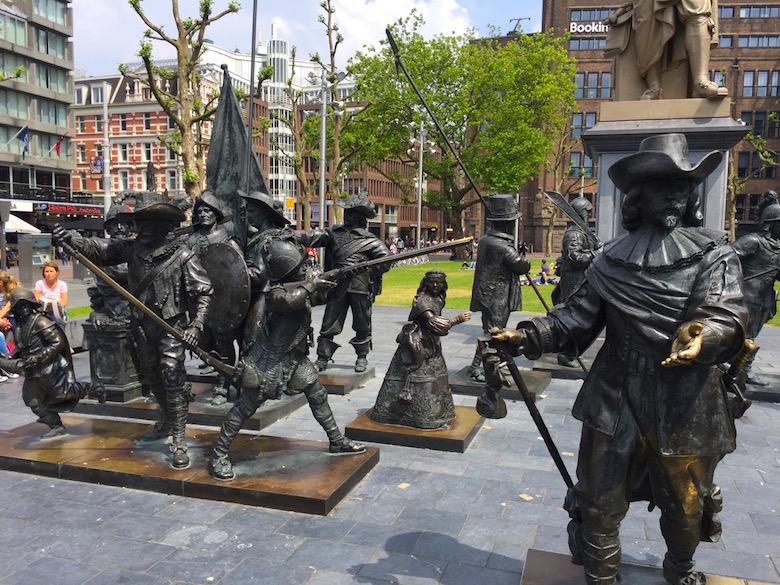