Anuradhapura is the capital of the North Central Province in Sri Lanka and is located in the driest area of the country. For more than 1.000 years it was considered the royal seat of the island. It is estimated that more than 100.000 people were living in Anuradhapura back then, covering an area of ​​over 40 square kilometers. The city was a flourishing ancient metropolis until it was abandoned in the 11th century after a lost war. Today tourists can find the largest surviving dagobas of ancient Asia and many beautiful examples of Buddhist sculptures in Anuradhapura. I spent one day in the city and had enough time to visit the most important sights. The most convenient way to visit the sights is to hire a driver. As the sights are very close to each other you can also explore the city by bike (around Rs 250 for a bike). For some of the sights at the UNESCO-recognised Anuradhapura Heritage Site you need a ticket that costs USD 25 a day. Following sights were my highlights of my visit to Anuradhapura:

Isurumuniya Temple is located at the southern end of the Anuradhapura Heritage Site. This well-preserved holy site was already built during the 5th century. The main shrine of Isurumuniya is a spacious cave, partly carved into the rock. A staircase leads up to the top of the rock, where you can enjoy spectacular views of the whole area. Of particular interest are the temples, the stupa, the beautifully landscaped lake, the museum and the Bodhi tree. 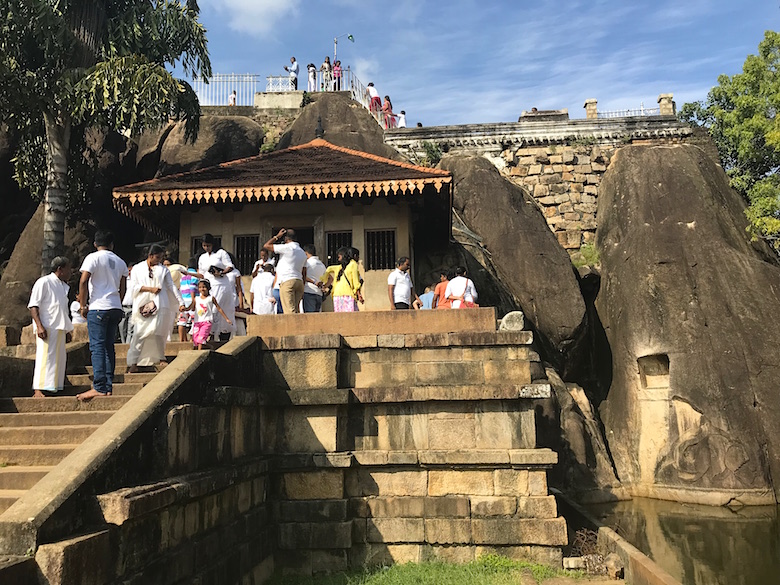 In the year 236 BC Sanghamitra Maha Theri, the daughter of Emperor Ashoka, brought the branch of a fig tree to Sri Lanka. It was a branch of the Bodhi tree from Bodh Gaya in India. Under this tree Siddharta Gautama received his enlightenment and became Buddha. That’s why today it is the largest sanctuary for Buddhists in Sri Lanka and a spiritual place where pilgrims draw peace and strength while praying and meditating. 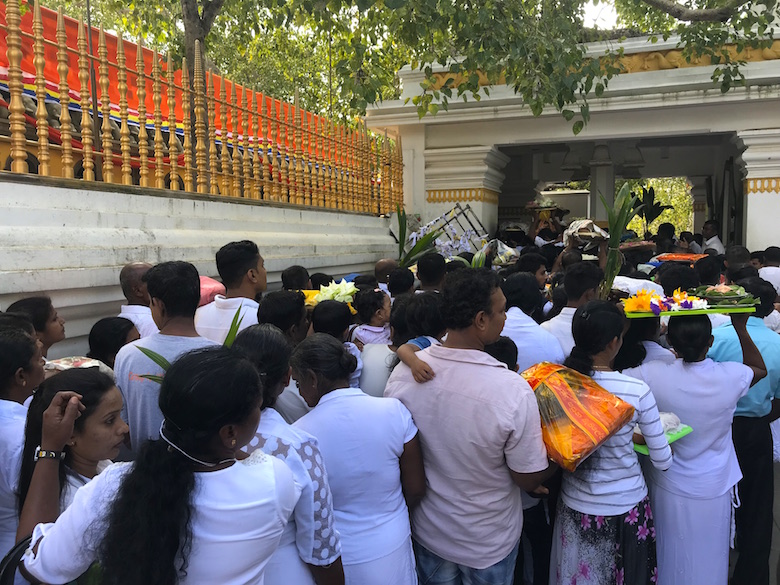 The massive Mirisavatiya Dagoba was built by King Dutugamunu and is linked to a legend. During his coronation ceremony Dutugamunu left for a bath in the lake Tissa Wewa. He left his scepter, containing relics of the Buddha, at the place where you can find today’s dagoba. After he came back, he wasn’t able to move the scepter and saw this as an omen. He ordered to build the Mirisavatiya dagoba in which he immured the scepter. 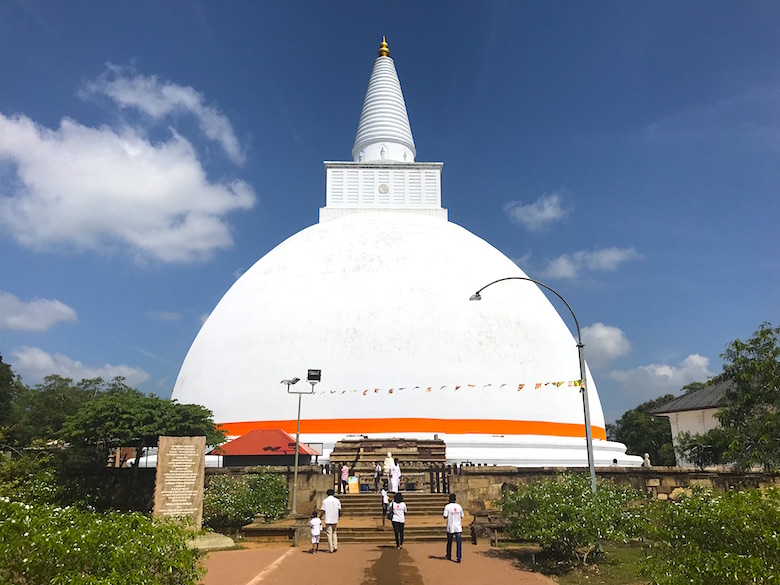 The Ruvanvelisaya Dagoba is the first monumental structure of its kind in Sri Lanka. It is up to 107 meters high and has a diameter of 92 meters. Its form goes back to a request of the king that the building had to look like a drop falling on a surface of water. The terrace of the Dagoba is framed by a wall, which is adorned by 338 stucco sculptures of elephants. 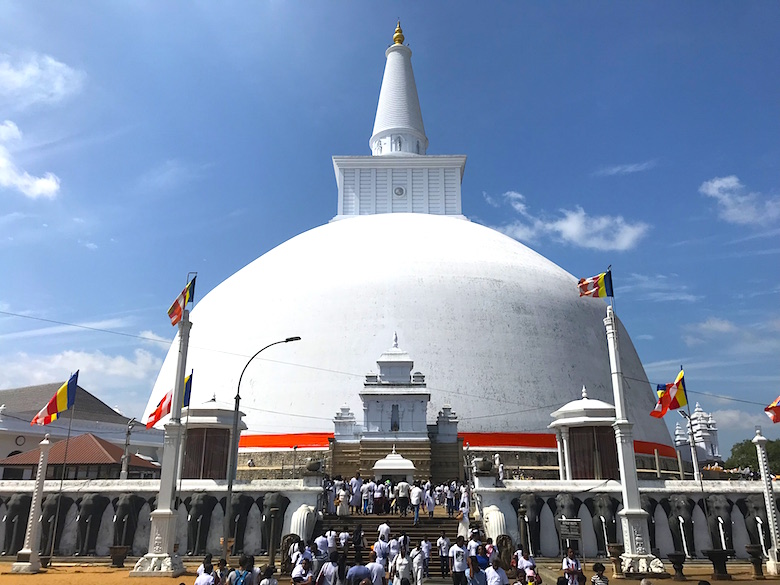 North of the Ruvanveliseya Dagoba, King Devanapiyatissa had the little Thuparama Dagoba built. It is exceedingly sacred to the Buddhists, because it is said to contain Buddha’s right collarbone. The surrounding stone pillars, which look like palm trees bent by the wind, are the remains of a circular temple. Their capitals are decorated with tridents, which symbolize wisdom. 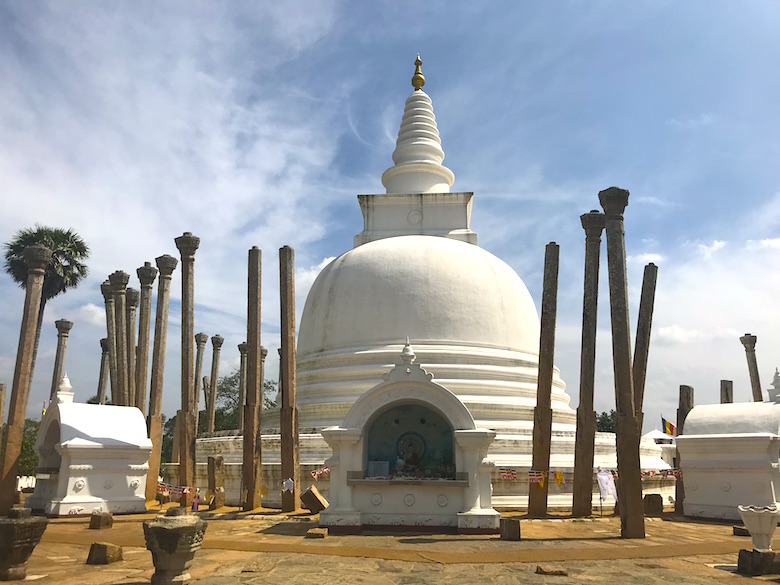 One of the most beautiful moonstones in Sri Lanka lies in the Mahasena Palace. Moonstones are crescent-shaped stone slabs with beautiful stone carvings. Traditionally they were built in front of buildings to keep away evil spirits.The lotus flower in the middle is surrounded by flames, geese, tendrils and a procession of elephants, lions, horses and bulls. This ornamentation is intended to symbolize the wheel of life or in other the words the cycle from birth to rebirth. 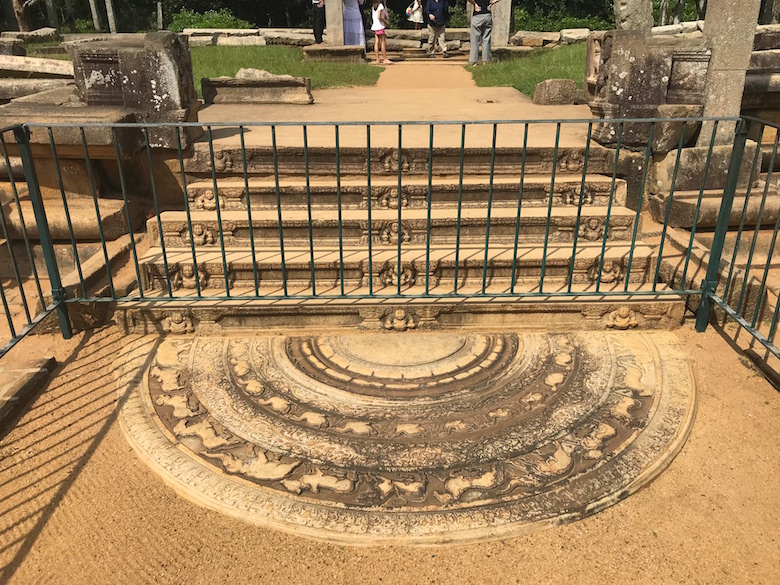 The highlight of the Ratnaprasada Palace is the 1.38 m high guard stone at the entrance. It shows the serpent king Nagaraja with a sharp cap, which is protected by the seven-headed Naga snake. In one hand he carries the vase of abundance and in the other one a flowering lotus-stem, both considered a symbol of purity. On an adjoining pillar an elephant sits as a guard. 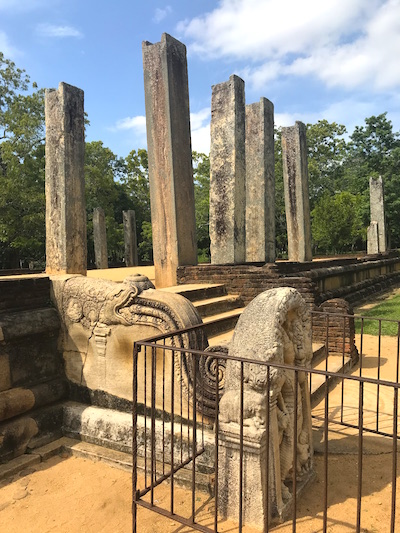 Once the Abhayagiri Temple was one of the largest structures in the world, but it is still the second largest dagoba in Sri Lanka. The building extends over a diameter of 95 meters and is 75 meters high. It can be entered via one of the four entrances, which were aligned according to the respective cardinal directions. 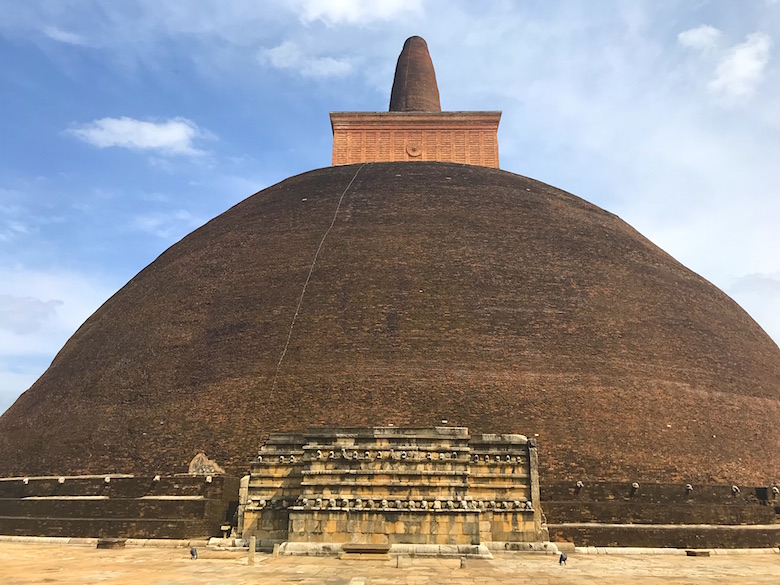 With a height of 122 meters, the Jetavanarama Dagoba was once the tallest structure of its kind in Anuradhapura. At the end of the 9th century it was destroyed by the south-indian Cholas. That’s the reason why today it is only 71 meters high. 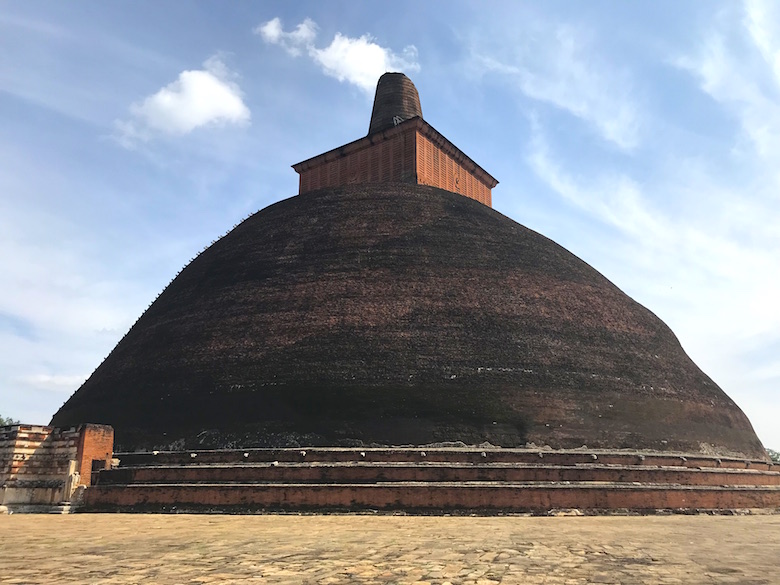 This twin pond is the most beautiful bathing pond of a Sri Lankan monastery. It is still not clear which monastery Kuttam Pokuna belonged to. Along the basin interior walls run various ledges, on which the monks could sit depending on the water level. 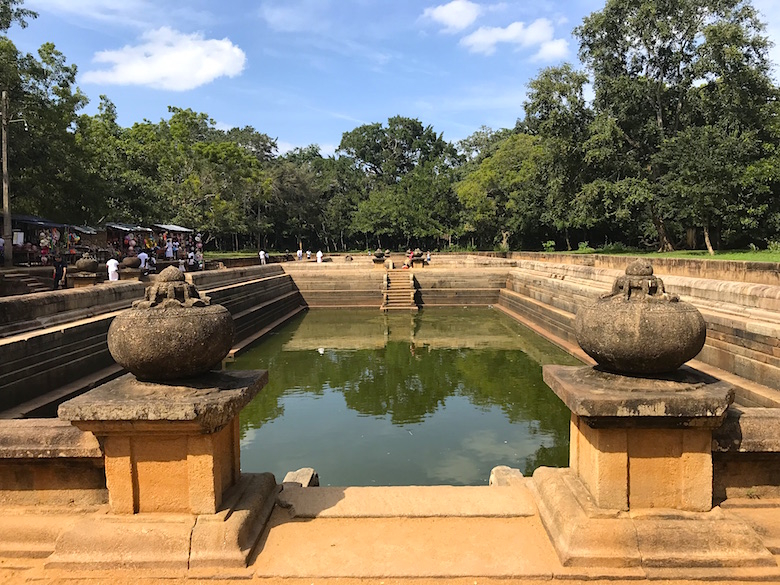